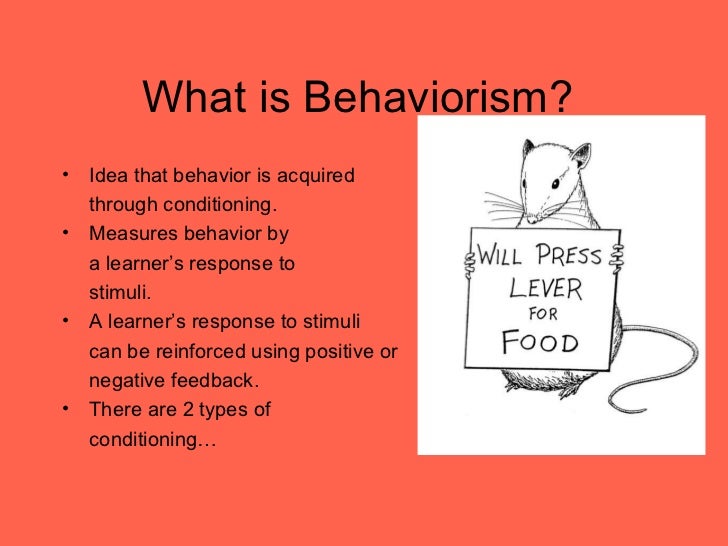 Behaviorism leads to the barbaric practice of ABA. What is behaviorism? Behaviorism is the theory that human and animal behavior can be explained in terms of conditioning, without appeal of thoughts or feelings, that psychological disorders are best treated by altering behavior patterns. It is only concerned with observable stimulus- response behaviors, and says all behaviors are learned through interaction with the environment.

Behaviorism started in 1913 when John Watson write an article called "Psychology as the behaviorist views it." It explained a set number of underlying assumptions regarding methodology and behavior analysis.

The basic assumption were:

1. All behavior is learned from the environment. Behaviorism emphasizes environmental factors playing a role in influencing behavior. It almost excludes innate or inherited factors. This focuses on learning.  It states that we learn new behavior through classical (a learning process that occurs when two stimuli are repeated and paired. A response which at first elicited by the second stimulus is eventual elicited by the first stimulus alone. An example is clicker training) or operant (method of learning that occurs through rewards and punishments for a behavior) conditioning. Both of the conditioning methods are know collectively as learning theory. It says that we are born as a blank slate.

2. Psychology should be seen as a science. Theories do have to be supported by empirical data gathered through careful and controlled observation through measurement of behavior.  In 1913 Watson said,"Psychology as a behaviorist views it as purely objectivity experimental branch of natural science. Its theoretical goal is  . . . prediction and control." The parts of a theory should be as simple as possible. Behaviorist propose the use of operation definitions. These are defining variable sin terms of observable, measurable events.

3. There is little difference between the learning that takes place in humans and that in other animals. There is no distinction between human and animal behavior. Research can be executed on animals and humans. Rats and pigeons have become the primary source for data in behaviorism. This is because their environments can be easily controlled.

4. Behavior is the result of stimulus-response. All behavior can be reduced to a simple stimulus - response association. Watson described the use of psychology,"To predict, given the stimulus, what reaction will take place;or, given the reaction, state what the situation or stimulus is that has caused the reaction."

1. Methodological Behaviorism. Watson's article "Psychology as the behaviorist views it" is often called the "behaviorist manifesto." It outlines the principles of behaviorism.

"Psychology as the behaviorist views it as a purely objective experimental branch of natural science. Introspection forms no essential part of its methods, nor is the scientific value of its data dependent upon readiness with which they lend themselves to interpretation in terms of consciousness.

The behaviorist, in his efforts to get a unitary scheme of animal response, recognizes no dividing line between man and brute. The behavior of man, with all its refinement and complexity, forms only a part of the behaviorist's total scheme of investigation."

Just like Watson, Skinner also recognized the role of internal mental events. He agreed they could not be used to explain behavior. He said they should be explained in the analysis of behavior.

In 1897, Ivan Pavolov published the results of an experiment on conditioning after originally studying digestion in dogs. Pavlovian (Classical) conditioning was discovered by accident. During the 1890's Pavolov, a Russian physiologist as researching salivation in dogs in response to being fed. He inserted a test tube into the dog's cheek to measure the saliva when the dogs were being fed.  He p

He predicted that the dogs would salivate in response to the food place in front of them. He noticed that they began whenever they heard footsteps of his assistant who was feeding them. When Pavlov discovered that any object or event the dogs learned to associate with food would trigger the same response. He made a discovery. He devoted the rest of his career to studying this type of learning.

In 1905, Edward Thorndike formalized the "Law of Effect." It suggested that "responses that produce a satisfying effect in a particular situation become more likely to occur again in that situation and responses that produce a discomforting effect become less likely to occur again in that situation." Thordike was a famous psychologist for his work in learning theory. This lead to to development in operant conditioning in behaviorism. Operant conditioning involves learning from the consequences of behavior. Skinner's thoery of operant conditioning was built upon the ideas of Thorndike.

He studies learning in animals. He devised a classic experiment in which he used a puzzle box to empirically test the laws of learning. He placed a cat in a puzzle box. He enouraged the cat to escape with a piece of fish placed on the outside of the box. The cats experimented with different ways to escape to get to the fish. They would eventually find the lever that opend the cage. When the cat escaped and was put in it again. Thorndike would record the time it took to escape. The cat learned that pressing the lever would have good consequences and they would adopt the behavior. It took less and less time to press the lever.

In 1913, Watson starts his behavioral school of psychology, publishing the article "Psychology as the behaviorist views it (described above)." During this phase, the unconditioned stimulus has to be associated with the conditioned stimulus on many occasions or trials in order for learning to happen. One trial learning can happen over certain occasions when it is not necessary to be strengthened. One example is being sick after food poisoning or drinking too much alcohol.

Little Albert was a nine month old infant that was experimented on. They wanted to see his reaction to different stimuli. He as shown a white rat, a rabbit, a money and various masks. Albert showed to near to any of these stimuli. He was startled when a hammer was striking a steel bar behind his head. When he heard the sudden loud noise, he would cry.

When Albert was eleven months old, the white rat was presented then a few seconds later the hammer hit the steel bar. This was repeated seven times. Every time Albert cried. He tried to crawl away. This caused Albert to be afraid of the rat.  Watson and Rayner noticed that Albert was also afraid of objects that shared characteristics with the rat. Some examples were the family dog, a fur coat, cotton wool and a father Christmas mask. This is called generalization.

Watson and Rayner showed classical conditioning could incite fear. It was a phobia because it was an irrational fear. The next few weeks and months, Albert was observed and 10 days after conditioning his fear was less marked. This dying out of a conditioned response is called extinction. After a month, he was still afraid but the response wasn't as severe.

In 1936, Skinner wrote 'The Behavior of organisms and introduced the conceptions of operant conditioning and shaping. This was Skinner's first book. It was published in May of 1938. It was a volume of the Century Psychology Series. It set out parameters of the for the discipline that was called the Experimental Analysis of behavior. Skinner looks at science behavior and how analysis of behavior produces data which can be studied, rather than acquiring data through neural process. In the book, behavior is classified either as a respondent or operant behavior. The respondent behavior is caused by an observable stimulus and operant behavior is where there is no observable stimulus for a behavior. It is studied with rats and the feeding responses they show.

In 1943, Clark Hull (May 24, 1884- May 10, 1952) published "Principals of Behavior." Clark Hull was from Akron, N.Y. He is experimental studies on learning and for his attempt
to give mathematical expression to psychological theory. He applied the deductive method of reasoning that is similar to geometry. He proposed that a series of postulates about psychology could be developed to have logical conclusions and could be tested. If a test failed, then a postulate could be revised and retested. This is how he developed ideas for his book "Principles of Behavior." It suggested that stimulus response connection depends on both the kind and the anount of reinforcement.

In 1948, Skinner published "Walden Two." In this he describes a utopian society based on behaviorist principles. This novel could have been considered science fiction. It uses science based methods for altering behavior that did not exist yet. This describes ABA. It is a controversial because its characters speak about the rejection of free will. It includes a rejection of the proposition that human behavior is controlled by a non corporeal entity. This can be a spirit or a soul. This book embraces that the behavior of organisms, including humans, is determined by the environment. Altering the environment can generate a socioculture system that resembles a utopia.

In 1958, the Journal of Experimental Analysis of Behavior starts. This is a peer reviewed publication for behaviorism studies.

In 1959, Noam Chomsky published his criticism of Skinner's behaviorism. He calls it "Review of Verbal Behavior. " He said that complex cognitive system such as language in high organisms cannot be explained though behaviorist principles as proposed by Skinner. His review was a broader critique of behaviorism. He chose Skinner's verbal Behavior book because it was thorough and detailed. He challenged Skinner and his model on the basis of lack of support from empirical data and persuasive reasoning. He believed that Verbal Behavior was historical. it has deep roots in Rationalist Psychology and Linguistics of the 17th and 18th century. Chomsky's review marked the 20th century paradigm shift from behaviorism to cognitivism in linguistics and psychology. It was literally the assassination of behaviorism.

In 1963, Albert Bandura publishes a book called "Social Learning Theory and Personality Development." This combines both cognitive and behavioral frameworks. In social learning theory,  Bandura agrees with the behaviorist learning theories of classical and operant conditioning. He adds two important ideas.
1. Mediating processes between stimuli and responses
2. Behavior is learned from the environment though process of observational learning

In 1971, Skinner publishes 'Beyond Freedom and Dignity." This is where he argues that free will is an illusion. Skinner argues that entrenched belief in free will and the moral autonomy of the individual hinders the prospect of using scientific methods to modify behavior for the purpose of building a happier and better organized society. It is summarized as an attempt to promote Skinner's philosophy of science, the technology of human behavior, his conception of determinism and what Skinner called "cultural engineering."

Posted by Amanda Seigler at 2:09 PM