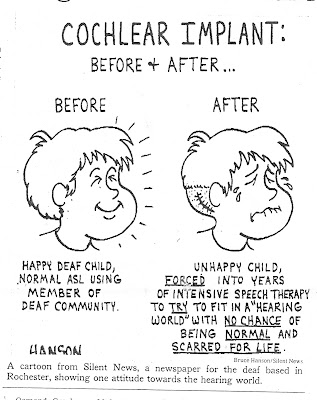 What is the cochlear implant? It is a device that is surgically installed in the cochlea to give a Deaf people sound. It uses electrical impulses to send sound waves to the brain by working around the damaged cochlea, creating a perceived indication of sound to a Deaf person or Hard of Hearing person.

The hearing people rejoiced when this technology was released. They would say this is a victory over the "tragedy of Deafness"and they expected the Deaf community to be very excited.

The Deaf community does not view itself as a group of disabled people. The view is a minority culture group. They have their own language, similar life and cultural experiences. Not being able to hear is not any more different than skin color or religion. The introduction of cochlear implants was well intended by medical professionals but it is viewed as an attack against Deaf culture. Hearing people are trying to enforce their idea of "normal" onto Deaf people. They were encouraging them to abandon their language and culture. They compare it to genocide.

How CI Parallels to Curebie culture and ABA Abuse

Cochlear implants were invented to fix Deaf people. According to hearing people, Deaf children can interact with their peers. They were able to interact with them before but now they are forced to conform.

ABA is to make autistic children act like their neurotypical peers. It considered successful if the child is indistinguishable from a neurotypical children. Encouraging the child to mask themselves to make it look like they are cured.

On the same token, you have the people who say who they cure autism. That is where Kerri Rivera, Amanda Mary and all the other charlatans come in. They play into the tragedy narrative. The Deaf culture was seen as a tragedy to the hearing people. The Deaf people just wanted to be left alone and let them live how they want. Well intending people do damage by acting on their convictions. They did not ask the community of people who were being affected.

On March 6, 1988, the Galludet University's board of Trustees announced that a hearing president had been selected as the seventh president to this all Deaf university. The Deaf community on and off campus advocated for Deaf president. That that point there were over 100 Deaf people who possessed doctorates, and more who held positions in administration. Two of the three finalist for the president position were Deaf. Many people were confident that there would be a Deaf president.

Even with all the evidence and support, the board chose the ONLY hearing candidate, Elisabeth A. Zinser. She was the assistant chancellor of the University of North Carolina in Greensboro. The students were understandably were not happy with this decision. The students shut down the campus with support of alumni, staff and faculty.

The students and their supporters had four demands:

1. Elisabeth Zinser must resign and a Deaf person selected as president
2. Jane Spilman must step down as chairperson of the Board of Trustees
3. Deaf people must make up 51% majority on the board
4. There would no reprisals against any student or employee involved in this protest

At the end of the week, the protest ended. They were victorious. All demands were met. Dr. I. King Jordan was Galludet's first Deaf president.

How DPN to the Autistic Civil Rights Movement

When I was introduced to the autistic community and heard about the fight, I first thought about this fight. They have similar themes but not the same.

The hearing people were talking over the Deaf people for too long. Galludet University is the university for Deaf people. Deaf people should be representing Deaf people. Not hearing people representing Deaf people. Autistic people are experiencing the same thing. We have to protest and speak out against ableism, abusive treatments, and therapies. Instead of a board of a University, there are mostly neurotypical people on the board of Autism Speaks. They want to decide what is best for us. When we speak out, they pretend they did not hear us. They are against what they call "self advocates."

The fight that Deaf community fought at Galludet gives us a hopeful future. They were able win their fight and be represented on the board. We can do it. We need to keep fighting.

http://www.lifeprint.com/asl101/topics/cochlear-implants-3.htm
Posted by Amanda Seigler at 11:13 AM