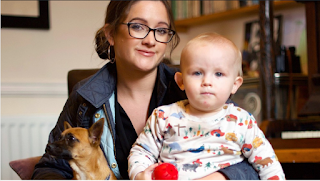 I am an ABA survivor and a pet professional and I am going to give my take on this show. I am in the United States and a follower was kind enough to send me the video files. This is my comparison in italics.

It opens up telling a little background information about Jo-Rosie, the dog trainer. Next scene you see a toddler being given a command and then given a piece of candy.

This is exactly how they do ABA. This is how they manipulated me into "quiet hands" and eye contact. This is an ABA method.

They then introduced a family with a three year old and the narrator describes their life like a "living hell." They describe the toddler's distress as tantrums. They make the behavior about the parents, not the child at all. He is aggressive and can be dangerous to the rest of the family.

They have Jo-Rosie talk about using the same methods of dog training on their son. She stated that the traditional parenting methods did not make any sense. You then see a scene when she tells her dog to sit and then her son does. They states that all species respond the same way.

The family that was introduced has a son name Greydon. They show him in distress. This is exploitation. This child can no way consent to being shown to all of the UK in a vulnerable state.

Jo-Rosie then goes to the family's home to observe Greyson's behavior. His mother is heavily pregnant. Jo-Rosie talks to the parents and want the child to be able to occupy himself and leave the parents alone. Isn't the point of having children to spend time with them? I have six of them myself.

She suggests putting all the items up that he is not allowed to use. I do have to say that is a good idea. If it is out of sight, he will not get upset.

She said if everyone trained their child like a dog, they would be more confident and curious.She talks to her dogs and says "How do we get him to be as good as you?" Comparing children to dogs is sickening.

This is the type of thinking that ABA therapists have. This is an ABA ideal.

She does make an excellent point in saying that the house is made for adults and when the child asks for something in a child like manner, the parents do not hear him. They need to be able to spot the signs of the child going into distress. If you can pin point the triggers, you can work around them. She however wants to deescalate the behavior as its beginning. Not preventing the distress to begin with.


Then they show a scene where Greydon is going to be going into distress. He is trying to get his parents attention when he thinks they are done talking. His sleeve is through the collar and he has a smile on his face. What I would do is give the attention he needed. He then asks for a toy shield. Instead of giving him something else instead for him to play with. They completely dismiss him.

Ignoring the behavior is an ABA technique is called planned ignoring. This is very stressful for the child.

While the parents are changing the environment for Greydon, the way they are supposed to, they meet another baby. Her name is Dolce. They seem to have a difficult time putting 14 month old to bed. She gives her a bath and then changes her and puts her to bed. As soon as she get put in the crib, the baby is severely distressed. After her mom has had enough, they go downstairs and settle down on the couch. The baby then calms down. This is what the baby needed.

They cut back to Greydon. He is hitting his mother and pulling her hair. His mother is trying to teach him a way to communicate that his mother thinks he should. In my opinion she needs to go slow with him. He is getting frustrated because his mother is not understanding him. They then bring in the clicker. It only works for so long until Greydon gets frustrated again.

This is an ABA technique. Children are more intelligent than this. This insults the child's intelligence. This is behavior centered not child centered.

She keeps on comparing children to dogs when the psychology is much different. They keep talking to the child like he is a dog.

Bath time is being taken care of with a clicker and treats. They are conditioning the baby to the bathtub with chocolate treats before bed. Having a baby eating that much chocolate before bed is never a good thing. When the towel comes out, the baby says no. There IS COMMUNICATION.

Then they show the baby naked on national TV. This is pure exploitation. The baby cannot consent so this should not be done at all.

The dog trainer is giving some good parenting techniques like not leaving the room until the baby is settled. This is not dog training, this is common sense. She is putting this off as a dog technique.

They cut back to Greydon. They bring home the new baby. The mother explains it as being hell. They concentrate too much on the parents and not enough on the children. They say that his tantrums are resurfacing around the new baby. It is normal for a child to regress when a new baby comes home. Jo-Rosie is talking about a three year old being more independent. He is THREE. They are not independent. They play a game where he has to find all the yellow items. This makes him not depend on this parents. His mother then says "get out of here." That is horrible. She completes that the manipulation so they can have him leave them alone.

This is manipulation. He needs his parents attention at this age. This is an ABA method as well. It is part manipulation.

It is not as bad as I thought it would be but it seems like a watered down version of ABA. They are teaching compliance and no way of saying no if something does not seem right. This is a form of grooming and can lead to abuse in the children's future. The dog trainer uses common sense parenting and makes it seems like its dog training techniques. It is very dishonest and very unethical. I would not trust any of my children with her. Children are not dogs and they learn differently.

For the toddler, I would have taken him to a psychiatrist because there could be an underlying mental health issue that they clearly ignored. This can cause more complicated mental health issues in the future. He may seem happy now but you do not know how much it well escalate.

For the baby, issues for sleep are normal. If the baby wants to be held before bed, they need to be held. You can never give a baby too much attention. This baby will be starved for attention. It can affect them negatively. One of my sons who came from foster care at 20 months old had this issue. Also sleep issues they need to have a sleep study done to see if there is another problem medically. They failed to do so.