Autistic Adult, flying by herself with the help of strangers 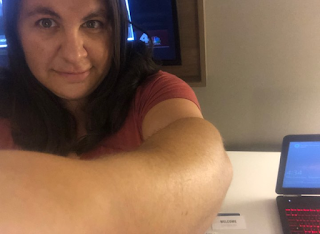 I am traveling to New York City on bleacher business. I will reveal what I am working on when I am allowed to. I promise. Scout's Honor.

I have to say Delta was brilliant. Not the staff because they did not notice. I was seated in the isle seat that is in a group of three seats. All of us from Florida, one is really a snow bird but that's ok. It was like any other flight, take off was normal. Nice and smooth. No big deal. The ladies I was sitting with were super nice. We were talking about the hurricane and how lucky we were to be missed by it.

There was some rough air, not really that big of a deal. It was soothing. The plane was flying around the hurricane. The movie Avengers: End Game was on so I watched it. Thier screen was not compatible with my bluetooth ear buds so I just watched it with captions. I used to do this as a kid. Not horrible. WIFI that they offered had no internet service. So I did not get to use that.

When the plane started the decent, It was a lot at once. I was not scared but getting overloaded. I do not go on rollercoasters for this reason. The sensation of falling does not do well with me. This is also for moving really fast. One reason I drive an electric car is because I barely feel it. Most plane rides I have been on smooth. Nothing like this. I was counting in Hebrew to keep me calm. The lady near the window was letting me know how close we were to the ground. The one next to me asked me if I was ok. That is all it took. I was able to keep myself from going into shut down. The lady sitting next to me. Her name is Lisa. She was asking me why I was going to NY. I told her about the article. She was impressed. Just so happens her boss's son is autistic and she is going to warn him about the bleach being pushed. Made me feel good.

To Lisa and the other lady who were sitting with me. THANK YOU. You do not know how much your kindness meant to me. Thank you again.

Now that I am here, I am relaxing in this beautiful hotel room and ordered in some pizza. Keto has a 1 day off this week. Who does not get pizza while in NY? That should be illegal.
Posted by Amanda Seigler at 5:17 PM

Email ThisBlogThis!Share to TwitterShare to FacebookShare to Pinterest
Labels: bleachcult, In the media