Back in August, the scouting year started again. We had new cub scouts and now our pack is up to almost 80 scouts. That is amazing but we had to recruit new leaders. This is great.

Two of my sons are in the Bear level. This is all third grade boys and girls. There are 6 new bears so we needed a new leader to help. I met a new leader we will call A. A seemed really nice at first. I had to miss the first meeting due to bat mitzvah lessons with my daughter. Not enough time for that and to charge my car enough to go. It happens sometimes but not often.

I showed up to the den meeting late. I met her. She asked about my diabetic son's insulin pump. I told her what it was. Then I mentioned both of my sons are autistic. She then proceeded to tell me that she saw the show "The Magic Pill" on  Netflix and that the ketogenic diet would cure my sons.

Needless to say, I was seeing red. I was good. I didn't scream at her. I did not want any personal issues in scouting. It has to be a positive environment. I then said that is not true because I am on the keto diet and I am still autistic. I also mentioned that being on a keto diet is very dangerous for my diabetic son. Ketones almost killed him four times due to negligence in foster care (for new readers, he is actually my husbands half brother but we have kinship custody).

I then told her that Kerri Rivera pushes the keto diet for children along with MMS or Chlorine Dioxide. I showed her the article. She was surprised.

Naturally I was livid. I was cursing in three different langagues. I had my older kids in the car and they knew not to repeat. English, American Sign Language and Hebrew.

I called my husband and he said "SHE SAID WHAT?!" He is the cub master.

The next week he called a leader meeting to discuss what to do and say around kids and families with different needs. She stopped.

To make amends and to show I did not hate her per se. just what she said, I invited her to hike with me.

She then texted me. She said I inspire her with raising my autistic children. Here is a screen shot: 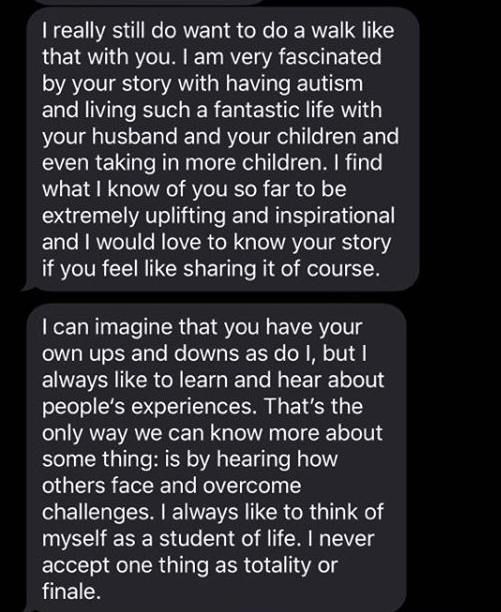 The positive to this is that she is open to being educated. I am going to take that. I think it would be a good opportunity to learn how to properly interact with autistic people and how we view ourselves. We are not broken. I think we could be really good friends. Being open to education is such a big step for any NT who really does not know.