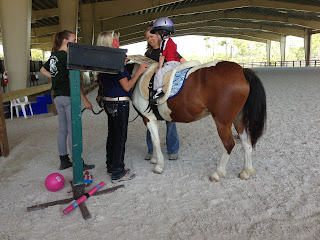 Hippotherapy. What is it? It is the use of horseback riding as a therapeutic or rehabilitative treatment, especially as a means of improving coordination, balance, and strength. It uses occupational, speech and physical therapy activities while on horseback.

Hippotherapy is an evidence based practice and clinical reasoning in the purposeful manipulation of horse movement as a therapy tool to engage sensory, neuromotor and cognitive systems to promote functional outcomes.

All hippotherapists are either occupational, physical or speech therapists. They integrate hippotherapy into the plan of care in addition to the other therapies the client may receive.

Why therapy with the horse? A horse walks an average of 100 steps per minute. Five minutes on a walking horse provides 500 neuro motor inputs to the client. In a therapy session, there is 15-25 minues of horse movement that is incorporated into therapy. This is 1500-2500 neuromotor inputs!

Hippotherapy must be done in conjunction with other therapies. It is not effective if that is the only therapy the child is participating in. It must not be treated as a separate service.

One of my son's participated in this when he was three years old. He is 10 now. He still talks about it. I can walk you through a typical hippotherapy session. I was present the entire time and they never took him out of my sight.

When we arrived, we would wait by a covered paddock. It was covered because we live in South Florida and it is hot! He would start by greeting his horse, Misty Mae (he still remembers her name) by allowing her to sniff him and giving her a carrot. After she ate her carrot, he would pet her face and then the therapist would lift him onto the horse. He was very tiny and would not be able to get on there himself.

The therapist would lead the horse with him on it. The assistant would make sure he was safe and did not fall off. They would do one lap inside the paddock.

When that was complete, they would hand my son a large ball and he would throw it in a basket. They would have him do it several times while on the horse.

This part I thought was odd but he really enjoyed it. They placed him on the horse backwards and had a puzzle on the horse. He completed the puzzle while the horse was walking. He was giggling the whole time.

He would practice commands the horse knew. Some for speed up and slow down. The horse was very gentle and even licked him a few times. He is a sensory avoider but he loved it!

The last activity would be collecting rings around the paddock that were on poles. He would order them by color. He really liked this activity.

When it was time to get off the house, they would stop Misty and he would be taken off. He would pet her face and then he would be ready to go. It was a very positive experience for him. Most therapy ranches offer scholarships if you cannot afford it. He did it on an almost full scholarship.

https://americanhippotherapyassociation.org/
My own personal experience with this therapy
hippotherapy recommended therapy