on January 18, 2020
The FMT results sound promising for a martyr or warrior parent but the study was not nonbiased. There are connections between Adams and Jeff Bradstreet,  the anti-vaxxer movement, the abandoned chelation therapy study, Generation Rescue, Autism Research Institute and Autism One

Connection between Adams and Bradstreet:

Adams and Jeff Bradstreet were investigators in at least three previous studies together:

These studies are always to find the cure or "fix" autistics. They research biomedical or pseudoscience methods to "treat" autistics.

Connection between Adams and the Antivaxxer Movement

When posting on the official Facebook page for Arizona State University, he was promoting the controversial documentary Vaxxed. He later added a disclaimer explaining that the documentary only covers one side of the MMR controversy.

Adams was also interviewed by Del Bigtree. Bigtree was the creater of Vaxxed.

Connection to the Abandoned Chelation Study in 2006

In 2006, Susan Swedo launched a study to prove that chelation was an effective treatment for autism. The National Institute of Health halted this due to lab rats having brain damage from the treatment. The risks did not outweigh the benefits. TACA did show some resistance. They accused the NID of halting progress. They use anecdotal evidence which does not have any weight in these type of studies.

In the Book Outsmarting Autism (2019), both Adams and Swedo were mentioned. They were credited for working together on the First International Symposium on Microbiome Health. This was located at the Children's Hospital Research Institute in Little Rock, Arkansas. Together they sought to design a therapy to modulate or manipulate their microbiomes. Microbiomes is the community of microorganisms that are in the gut.

One year after establishment, Autism Nutrition Research Center made a donation of supplements to Generation Rescue.


Connection to the Autism Research Institute

Adams is on the Science Advisory Panel at Autism Research Institute 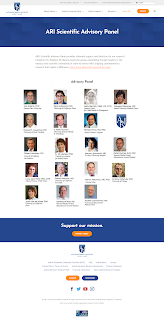 They are still relying on parent reporting as proof of effectiveness of any treatments such as chelation which is very dangerous.

Connection of Adams, Bradstreet, and Swedo with Autism One

All three of these researchers have been presenters at Autism One. No surprise there!