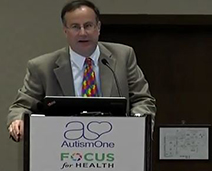 James B. Adams is a President's Professor at Arizona State University. He is the director of the autism/asperger's research program (that is what it is called, not my words). He currently holds a post at the South West College of Naturopathic Medicine. He is also president of the Autism Society of Greater Pheonix. On top of all that, he is also the co-chair for the Autism Research Institute's advisory committee. He has received a National Science Foundation Presidential Young Investigator Award from President George Bush in 1996. He has been trying to cure autistics for years. He has also was a speaker for Autism One.

In 1984, Adams earned his bachelors degree from Duke University in physics. He also earned his Masters of Science and PhD in materials engineering from the University of Wisconsin-Madison.

Adams had an interest in Autism. This is because his daughter Kim was diagnosed in 1994. He suspects it is caused by vaccines and he stopped vaccinating her after diagnosis.

He hypothesized that heavy metals, especially cadmium and mercury, played a role in the development of autism. He advocates the treatment of chelation therapy. He goes on to say that elevated testosterone levels are linked to the depletion of gluthion. He said it resulted with increased susceptibility to heavy metals. He cited a study by Simon Baron- Cohen that had "major logical and factual flaws," according to some researchers.

In 2015, Adams Founded Autism Nutrition Research Center. This non for profit puts out more supplement marketed to autistic children. There has already been an adverse effect from his supplements. 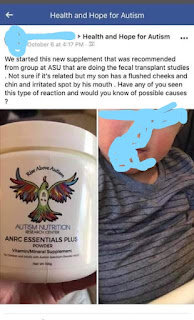 In 2019, Adams and a group of researchers published a study that claims that Fecal Microbiota Transplant therapy has success with autistic people. He has a hard time getting funding for his research, he has a go fund me campaign to fund his research! https://www.gofundme.com/f/microbiota-transplant-for-children-with-asd


He presented this study at Autism One:

In a 2006 NBC News interview, Adams stated that acrodynia, a condition that affected children more than a century ago, was caused by mercury containing teething powder. He claimed that the "symptoms of acrodynia were pretty similar to the symptoms of autism." A paper published in the medical journal Pediatrics, notes many major differences between the two conditions.

In 2016, Adams posted an advertisement for the anti vaxxer documentary Vaxxed on of of ASU's offical Facebook pages. After receiving some well recieved clap back, he added the disclaimer "represents only one side of the MMR-vaccine controversy." He later admitted that he had not seen the movie before making this post! It was later deleted by ASU's request. He continued to promote the film as president of Autism Society of Greater Phoenix. He denied that he is an antivaxxer but says he believes in rare cases it may cause autism. This is despite replicating results numerous times in different studies that proves quite the opposite.

He has been trying to cure autistic people instead of listening to them. He is very dangerous to the autistic community.