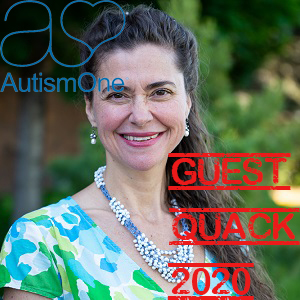 She started down this path as a parent. Her children have physical and developmental disabilities.

She is a member of the National Association of Pediatric Nurse Practitioners (NAPNAP), the Medical Academy of Pediatric Special Needs (MAPS), the Institute of Functional Medicine (IMF), the MN Holistic Medicine Group, the International Lyme and Associated Diseases Society (ILADS), and the Sigma Theta Tau International Honor Society. Another highly educated quack.

She has an interest in preventing health and developmental issues in children through pre-conception testing, counseling, and interventions with parents before becoming pregnant, optimal pregnancy and nutrition care, and early intervention for infants, toddlers and young children with neurodevelopmental differences. In other words, she pushes early detection (which is not a bad thing in itself, it's just what is done with this information), ABA and eugenics.

She focuses on balancing the microbiome and treating underlying medical conditions and imbalances in children in order to help them reverse symptoms and function typically. In other words, she has the principle that if the gut is healed, then the patient is healed. Not all illness comes from the gut. These quacks are obsessed with the gut.

She uses principles of nutrition, holistic/integrative medicine, functional medicine, biomedical medicine (quack cures), mind-body-spirit medicine and nutrigenomics. She believes 5-10% of health issues are dictated by genetics and 90-95% of health issues come from the environment. In fact, different ailments have different sources. Some illness has no known cause.

She states in an interview that since World War II, there have been 87,000 more chemicals introduced to the market. She said that very few are tested for human health or safety. She said the rise in toxins causes chronic diseases and illnesses that are prevalent today.

She says if a patient sweats every day. Sweating is a great way to get rid of toxins. Most toxins leave the body through sweat. She recommends an infrared sauna, exercise, or hot baths. She says to towel dry, and take a shower so the toxins do not get reabsorbed.

She says people need to be well hydrated. She is 100% right on that. Then she shifts over to tap water being full of pharmaceuticals, and hormones from women urinating. She says to drink filtered water.

Part of this lifestyle detox is not letting the chemicals in the body and making sure to use organic products and eat organic food. Also to make sure clothing, furniture, and carpets do not have flame retardants because those are toxic chemicals even though it prevents that person's home from catching fire.

The other methods that she recommends are drainage and binder remedies, calcium bentonite clay, charcoal, herbs, nutrients, infrared sauna, ozone sauna, chelation, and other things.

Belseth believes there is a chance of reversing autism. She claims that some of her patients have reversed autism. She states this is done by using the biomedical treatment and functional medicine. She preaches ABA, speech therapy and music therapy.

Treatments that She Believes  Can Reverse Autism

Beltseth says if the child's body is healthy then treatments work better. She says that autistic people have disturbed guts, the microbiome is disrupted. "100% of children with autism have an issue with gut microbiome." She says with restrictive diets (such as gluten-free and dairy-free and healing the gut, the child will be cured. The foods that are being substituted need to be free of sugar, free of dyes and whole. The foods must be as unrefined as possible. She also says to minimize the carbs and have clean protein.

She says that all autistic kids need to be treated for infections they might have. These could be fungal, bacterial, parasitic, tickborne, vector-borne, and Lyme disease. She thinks all autistic kids have Lyme, like Kerri Rivera but it is not true.

She says to look at the child's immune system too. She says they get sick all the time or never get sick. She says it should be somewhere in the middle. She recommends vitamin D, eating probiotic-rich foods, and protect against immune-related exposures.

"Toxins are huge in autism." She believes every child has toxins but autistic children have a toxin overload.

She says that "Its really hard parenting a child with special needs."Belseth says that working on relationships and reducing stress can help reverse autism as well.

"It's better to prevent autism before it starts." The Nazis of T4 had the same beliefs. "Unworthy of Life" comes to mind.

None of these "treatments" that she has been recommending have been scientifically proven.

There is No Such Thing as Reversing Autism!

According to the Center for Disease Control, there are no medications that can cure autism or treat the "core symptoms."

With autistic people, there is nothing to cure. Autism is just a natural variation of the brain, part of the neurodiversity spectrum. Acceptance is the key to society. Thinking autistic people need to be prevented or cured just leads to death and torture.