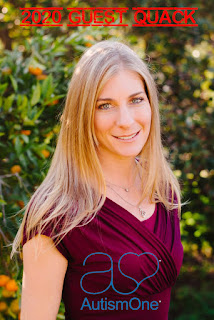 Summer Boger is a 40-year-old from San Marcos, California. She graduated from Mueller College of Holistic Studies in both their Eastern and Western programs. She has been practicing massage, detoxification and functional medicine since 1999. Mueller College lost its accreditation in 2016. The Letter is here.

She specializes in detoxification for Lyme disease, chronic fatigue, ALS, fibromyalgia, and neurological conditions.   She works with expectant mothers to provide a holistic approach to care. She is a massage therapist at Cap Wellness in California. She is also MLM selling essential oils for doTERRA.

She is the secretary of the Eagle Forum of Califonia. The Eagle Forum is a conservative organization that is concerned about the issue of vaccines and how government control and social media is affecting the public's access to information.

This bill is an amendment to the Califonia Day Care Facilities Act. This provides licensure and regulation of daycare centers, family care homes, public schools and charter schools. The violation of this law is a crime. This law requires to be vaccinated prior to admission to these type of facilities. The existing law requires an exemption for medical reasons or because of personal beliefs. The new bill would prohibit a person from being employed or volunteering at a daycare center, public school, charter school or family care home if not vaccinated against the flu, pertussis, and measles. This bill specifies that a person would be exempt for medical reasons.

This is a good thing. Summer Boger does not think so.

Boger was interviewed by the Epoch Times:

"We should be able to have healthy, critical conversations, and we should be able to question. I feel like those are inalienable rights that here in America we're allowed to debate, we're allowed to have conversation. And they're considering this conversation misinformation if it goes against the vaccine agenda." She says people have a valid concern about vaccines or they may have had reactions to vaccines that made them start to worry about vaccine safety. "The biggest reason [vaccine hesitancy] has gotten the most publicity is that they are not 'ex vaxxers,' not antivaxxers, which means they, themselves, were vaccinated and they had a severe reaction and decided after they weren't going to vaccinate anymore."

The other reasons people choose not to vaccinate are allergies, religion, ethical reasons and more. Boger said that many people are aware of the ingredients of vaccines and the vaccine making process. She thinks the vaccine ingredients included aborted fetus tissue. She says that some people may be opposed to having certain substances injected into their bodies.

She claims that people are concerned about how vaccines are studied. "There is something called the gold standard which all pharmaceutical drugs or medications are supposed to follow. There is a double-blind placebo used, and they're able to tell what the effect of that drug is." That is how a normal scientific study is carried out. She is correct.

Boger claims that not all vaccine testing takes this approach. This is true. As someone who has been in a trial for a swine flu vaccine, I can tell you. There is always informed consent. There is a packet that the test doctors go over with the participant. There is informed consent. This is more so in a trial than a normal doctor visit. They were testing a new swine flu vaccine. Half the participants were administered the one that is already FDA approved and the others were given the vaccine they were testing. Weekly bloodwork was taken to measure the antibodies in the body. This was to measure the effectiveness of the vaccine. According to the World Health Organization, "Randomized, placebo-controlled trial designs often raise ethical concerns when participants in the control are deprived of an existing vaccine."  The WHO lists vaccine hesitancy as one of the 10 top health threats.