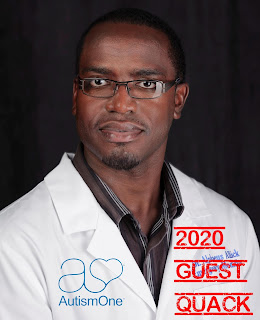 Dr. Aslphaeus Allick is an emergency medicine doctor from the Bahamas. He currently is employed by Doctors Hospital in his home country. He preaches that a plant-based diet will give everyone "optimal health."  It prevents all chronic diseases from cancer to gall stones and everything in between.

He starts his lecture with a few disclaimers:

"I, by all means, call myself an expert. It is a situation where you are passionate about something you're excited to share with others what you've learned. At the end of the day, if it can be something that can be of benefit to the people we share it with, why don't we do it?"

"I am an Adventist."

Already he is off to a horrible start. When listening to a lecture, the listener should want to listen to an expert in the field.

He starts off by saying chronic disease can be prevented by a plant-based diet. He draws people in by saying there are millions of people dying from chronic non-communicable diseases. He mentions that 78% of people in the Bahamas are overweight. In upper-income countries, chronic diseases are the leading cause of death.

According to the CDC, chronic diseases are defined by ailments that last more than one year. Lifestyle is a factor in many of these chronic diseases but not the only factor. Environmental factors and genetics play a significant role. Changing lifestyle can help prevent these chronic illnesses but its not a guarantee.

Dr. Allick claims when on plant-based diet calories do not have to be counted as strict. The body will take what it needs and the body will excrete everything else out. When eating too much of the wrong things, obesity happens. This is a risk factor hypertension, high cholesterol, plaque in the bloodstreams and type 2 diabetes (he does specify).

In the lecture, Allick used the Weight Watchers program as an example. Weight Watchers says “Remember that calories still count on a plant-based diet,” she adds. “Try measuring foods out to keep portions in check, and don’t eat straight from the bag or container.”

Colorectal cancer, according to Allick, is only prevalent in higher-income countries. He claims it can be prevented. He claims that animal protein intake is why more of the people who had this type of cancer suffered from it. He said the countries with more meat intake, had higher rates of this cancer.

According to the American Cancer Society, "There's no sure way to prevent colorectal cancer. But there are things you can do that might help lower your risk, such as changing the risk factors that you can control."

He also says that meat causes inflammation and abrasions in the blood vessels. He says the plaque is like a bandaid after the abrasions happen. The cholesterol breaks off the plaque and that causes heart attacks. All of this leads to chronic illnesses. He says when cooking meat, it releases carcinogenic chemicals. He uses WHO's recommendation against processed meats and put all meat in that category.

According to Harvard University, red meat does cause inflammation and does not directly cause cancer. To reduce inflammation, fatty fish and chicken should be added to the diet.

It has been thought that the growth hormones in cows milk causes early puberty. A study in 2001, lead by Dr. Kaplowitz, showed that girls who developed sooner had a higher body mass index. The rise in early puberty was rising with the rate of childhood obesity, not by diary products.

Dr. Allick did not have anything to say about autism but he did have a lot to say about the gut. He is a Speaker for Autism One 2020.

Posted by Amanda Seigler at 8:44 PM