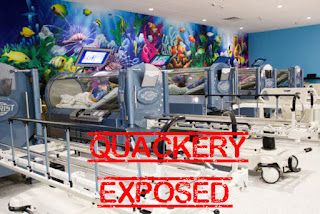 The patient's blood carries oxygen throughout the body. This helps fight bacteria and stimulate the release of growth factors and stem cells, which promotes healing.

The human body's tissue needs an adequate supply of oxygen to function properly. When the tissue is injured, it requires even more oxygen to repair itself and function. Hyperbaric oxygen therapy increases the amount of oxygen in the blood can carry. The increase of oxygen temporarily restores normal levels of blood gases and tissue function to promote healing and fighting infection.

There is insufficient evidence to support claims that hyperbaric oxygen therapy can effectively treat the following conditions:

Why Quacks Think it Reverses Autism

According to TACA, it:
1. It heals the gut and brain inflammation
2. It increases blood flow to key areas of the brain
3. It helps with gut parasites, yeast or bacteria
4. Helps in all four areas.