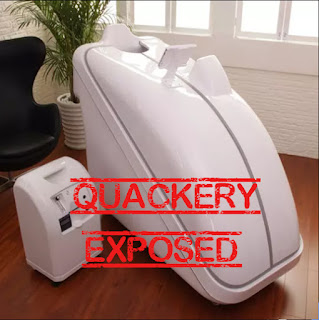 An Ozone sauna is a sauna that infuses Ozone, three oxygen atoms, through steam and hot air into the skin and body in a sauna room. Ozone is absorbed through the patient's pores and absorbed into the body.

Ozone (O3) gas was discovered in the mid 19th century. It is a molecule consisting of three atoms of oxygen in an unstable structure. It is unstable due to the presence of mesomeric states. A mesomeric state is when the electrons of an atom are transferred from multiple bonds to an atom or from multiple bonds to a single colavent bond or an atom with lone pair of electrons to adjacent single bonds. In other words, the electron is overworked. Ozone gas is colorless, has an acrid odor and explosive in liquid or solid form.

In 1976, the FDA initially stated, and restated in 2006, when ozone is inhaled, it is a toxic gas which has no demonstrated safe medical application, through their position statements primarily dealing with its potential for causing inflammation and pulmonary edema in the lungs.

In April 2016, the FDA prohibited all medical uses of ozone "in any medical condition for where there is no proof of safety and effectiveness." They stated "ozone is a toxic gas with no known useful medical application in specific, adjunctive or preventative therapy. In order to be effective as a germicide, it must be present in a concentration far greater than what can be safely tolerated by man and animals."

It is sold as unproven quackery for various illnesses and conditions. Starting in 1991, the FDA has prosecuted and sent to jail several people presenting themselves as medical doctors while selling ozone therapy products as a medical cure or running clinics using ozone therapy using ozone therapy for healing. Following this, several arrests have been made in other countries. There are at least 10 deaths that have been related to ozone therapy.  There were 9 cases that had been investigated, 8 of them used false credentials.