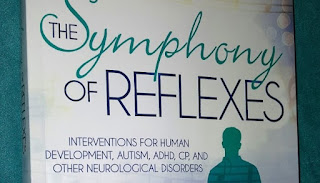 Quantum Reflex Integration (QRI) is a therapy that claims to helps learning disabled, autistic, sensory processing disorder, anxiety, depression, and chronic pain people of all ages. It was created by Bonnie Brandes.

The reflexes appear and integrate in stages. They are present when a baby learns to roll over, crawl and walk. It is believed when this integration is interrupted, a child's development may not progress smoothly. They say that children need to move through their primitive reflexes so they can have access to their "learning brain." They believe this is where academic learning happens.

Primitive Reflexes Do Not Integrate Correctly with Some people

It is believed that primitive reflexes help an infant survive and learn control over the body. These reflexes integrate or go dormant when the connections in the nervous system have been made and the brain has been trained by repetition.

They believe when reflexes integrate, the child learns and develops "normally." When integration is halted or delayed, "normal" development is delayed. This affects the child physically, emotionally, and cognitively. They believe that autism and OCD are caused by an active fear paralysis reflex.

Reasons believed to cause flexes to remain active:

Reflexes and physical/behavioral/emotional characteristics believed of a retained reflex:

Cold laser therapy is painless and safe for children. It has been used world wide and cleared by the FDA. This is true. (Side note: I have used it in veterinary medicine. It used to speed healing and it is effective.)

The cold laser is designed with different frequencies of red and near-infrared light to target different tissues of the body. They are much different than surgical lasers. It penetrates the skin to reverse abnormal cell function.

By using this laser, they believe they are "unsticking" primitive reflexes. They believe that a patient's body may signal different priorities to a therapist who is testing reflexes. The therapist would then start working based on the highest priorities they see that day. When using QRI laser therapy, every reflex is treated in a strategic order. They say there is less guesswork involved but this is not the intended purpose of the cold laser.

These sessions are normally 45 minutes- 1 hour long. This is a long time for a child to sit still. When these lasers are in use, protective eyewear need to be worn by everyone in the room. The laser probe has to be rubbed on the body for the entire time. For some, this is a sensory nightmare.