As most of you know, my childhood wasn't a happy one. Like many undiagnosed autistics, growing up can be very traumatic when you are not understood and you are forced to mask and "become normal." It was very true for me.

I don't remember this but at three, a family friend told me this, that I was spanked over and over again for having a potty accident. To put things in perspective, all of my kids were independently using the toilet from ages 4-5.

When I was 7, I was diagnosed as ADHD and that's when I remember the abuse starting. When going over the report with my parents, they were recommended ABA to have me use better methods of paying attention. I will not retype what I went through because I do not wish to relive it.  You can find it here.

Everything they did or did not do was because they wanted me to become normal. It was mostly emotional and mental abuse. There was a little physical thrown in there. My father asked me what was wrong with me so I told him I was stupid. He slapped me across my face.

Fast forward to my senior year in high school. It was time to choose a college. I found the farthest school while still being in the state. That way they would have a hard time seeing me. It was an 8-hour drive and it was in the mountains. It was really cold in the Adirondacks and I knew they would not see me often. I could not wait to escape and go to college.

In Plattsburgh, the town where my school was, people were so nice. People accepted me for who I was. It was great. Nothing like home. One friend I met her parents and I figured out not all parents were like mine. This family still treats me like I am theirs. Her mom even made me a blanket with a stain glass star of David fabric. This was 20 years ago. I still have this blanket. I stayed with them when I was told I was not allowed to go home for Thanksgiving. This was also around the time I met my husband. I was home. I felt like I belonged for the first time in my life.

Around this time, I cut down contact with my parents. It wasn't no contact but it was less contact. My mother went as far as to hire a private investigator to find out where I was. I did not leave. I just did not call home. My life was peaceful when they weren't in it.

I was diagnosed as autistic when I was 32. I am 38 now. They never accepted my diagnosis and always told me I was abusive when I was responding to their abuse.

Now we are 3 Christmases ago. I was married, I had 3 children of my own and had 4 kids we had custody of through the courts. My son who I call Bug was being tickled by my father. He hates being touched and my father was the only one who did not respect that. Then Bug told him "I don't like that and I don't like you." He advocated for himself. I was expected to correct him. I told my father no.

We had three peaceful years. Then we got a letter from social security because we had to do a financial review. My father had invested money in my son's name. We had to get the documents from it. That means I had to contact my father. Something about this. He did this with me years ago and my accounts were frozen due to them not reporting it to the IRS. When my other sons were babies he wanted to do this and I told him no.

My husband found out and called the police. I will report more on that when I can. I do not want to jeopardize anything. Just know we are fighting back.

I needed to get these documents so therefore I had no choice but to call him. Before I called him, I texted my mother. I will show you the screenshots. They are not pretty. 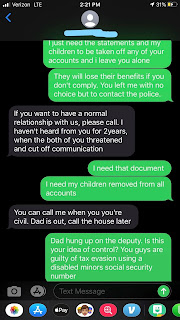 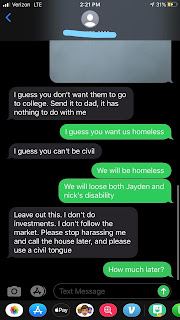 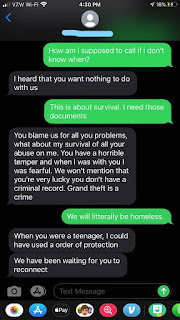 The phone call with my father was not better. He kept on telling me how he never heard from me and the last he heard from my husband and me was when he called him up and told my father exactly what he thought of him. I was masking so hard. I had been trying to unlearn everything I had been trained to do in ABA but I had to remember everything and do it right then and there. Most of the conversation was to take my son's name off these accounts. It alerted social security. Lucky for us the kind of accounts will not affect their benefits. In order to get these documents he made me promise to invite them to my oldest son' bar mitzvah. Ultimately, it's my son's call. Not mine.

Just talking to him and hearing his voice, triggered a trauma response. I felt myself reliving all the abuse over the years. It was playing over and over in my head. It was like I was the same child cowering in fear. There was nothing I could do.  I was feeling the same emotions, felt all the anxiety, felt all the fear. I had a physical response to the trauma I lived through. I escaped but then they had me trapped again. I feel like my soul had been sucked out. They got their control back. I went into complete shutdown when I hung up. It was horrible. I disassociated from myself. It was like I was not in my own body. After I was done with that, I just cried. I was finally having peace in my life and this happens.

What my mother does not understand is we do not want their money. Its blood money as far as I am concerned. It is tainted and we are doing just fine without their help. They say it's for college. If they want to give them money, its always with conditions. If you give someone something, it should never be with conditions. They never took us out of their will but I wish they would. I do not want to be connected with them at all.

I got the documents I needed this morning. When I asked if he had anything showing that I do not have access to the accounts, he was tone policing. 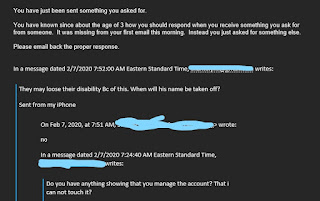 I am trying to recover from reliving the trauma that I suffered. They make themselves to be the victim.

The point of writing this was to show that it takes very little to trigger a trauma response. This might not seem little but it's little compared to what I have been exposed to.