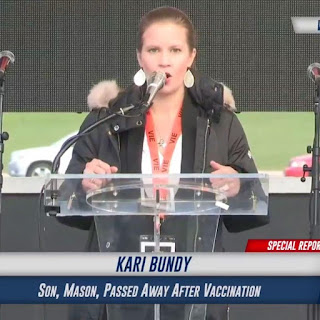 Karie Bundy's baby boy was born five weeks premature. He was seemingly healthy and thriving. He was crying at the time babies normally have colic. Colic does not last forever and it stipped about 2 months later. This is normal for colic.  He as vaccinated on the normal vaccine schedule.

On March 4th, Karrie found her baby had died from SIDS. At the baby's funeral, a stranger asked her if she vaccinated her baby. She responded, "Fuck you for even asking that. How can you ask that? You're asking if I did it . . . if I caused him to die?"

Karie thinks that the reason there isn't as much said about parents that vaccinate and their child dies is we have this stigma and all we have this all guilt because if we would have known better this never happened we would still have a child.


"Oliver, my son was born 2 years later and is unvaccinated actually got whooping cough at a year old." Luckily, Oliver survived this disease that is potentially very deadly.

Since the tragedy with her baby, she has been a public speaker against vaccines. She claims that they kill and cause SIDS. She speaks at Autism One, has appeared on propaganda film Vaxxed and many other places. She is spreading misinformation and can potentially cause others to die of deadly diseases.

She has also adopted a "natural lifestyle."

"I'll continue to teach you what I've learned about how to grow food, how t turn that food into delicious meals how to take care of your family with natural remedies, holistic nutrition, clean living, essential oils, etc."