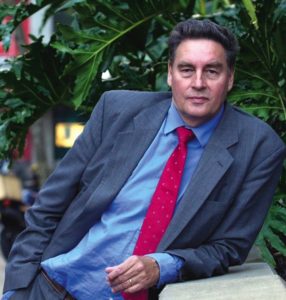 Paul Connett is a British anti-water fluoridation activist. He is the executive director of Flouride Action Network (FAN), located in Binghampton, New York. It is one of the largest organizations that oppose water fluoridation in the world.

Connett started activism in 1968. He volunteered for Eugen McCarthy's presidential campaign. He met Allard Loweenstien there. The pair founded the American Committee to Keep Biafra Alive. This was in response to the famine caused by the Biafran War.

He graduated from Cambridge University. He earned his Ph.D. at Dartmouth College in New Hampshire. Connett taught chemistry and toxicology from 1983-2006 at St. Lawrence University in Canton, New York. He retired with a full professorship.

In 1996, Connett started to investigate of fluoridation. In 2000, He cofounded FAN. He directed it from 2000-2015. In 2003, he gave an invited presentation to a panel appointed by the US National Research Council.

In 2004, he published the paper "50 Reasons to Oppose Fluoridation in Medical Veritas." In 2010 he co-authored The Case against Flouride: How Hazardous Waste Ended Up in Our Drinking Water and The Bad Science and Powerful Politics That Keep It There." In 2013, he wrote the book "The Zero Waste Solution."

"Starting in the late 1980s studies emerged from China that indicated that the IQ of children were lower in villages with high fluoride exposure compared to those with lower exposure. Subsequently these studies have been joined by others from India, Iran and Mexico. 27 of these studies were reviewed by a team from Harvard (Choi et al, 2012). For many years proponents of fluoridation have contented themselves with the notion that these studies were done at higher concentrations than used in community water fluoridation (0.7 to 1.2 ppm) and that there were weaknesses in the methodologies used. These criticisms can be dismissed now that US government funded studies indicate that the offspring of children whose mothers were exposed to fluoride during pregnancy at the levels expected in fluoridated communities in Mexico, Canada and the US, had lowered IQ. The most recent study from Canada indicates that children who were bottle-fed in fluoridated communities had lowered IQ than children bottle-fed in non-fluoridated communities by as much as 9 IQ points. Never-the-less health authorities in fluoridated countries are still failing to advise pregnant women to avoid fluoridated water nor warn parents to use bottled water not fluoridated tap water to make up baby formula. Meanwhile, the Fluoride Action Network along with several non-governmental organizations and individuals have taken the EPA to court under provisions in the Toxic Substances and Control Act (TSCA) to force this agency to forbid the deliberate addition of fluoridation chemicals to the drinking water to avoid the unnecessary risk they pose to the mental development of the infant and the fetus. The case is due to be heard April 20, 2020 in the San Francisco Federal Court."

According to the CDC, drinking fluoridated water keeps teeth strong and reduced cavities by about 25% in children and adults. By preventing cavaties, community water flurideation has been shown to save money for both families and the US healthcare system.

There was a study that assessed 500 mothers and their children from 6 cities in Canada. The researchers estimated that the mothers fluoride exposure when pregnant and then looked at whether it was linked with the child's IQ when they reached 3 to 4 years old.

The researchers found a 1mg increase in the mother's estimated daily intake of fluoride through drinking water. When the children were 3 or 4, the boys had lower IQ scores than the children of the motehrs who had lower levels of fluroide. There was no statistical association with the grls based on the mothers' urine tests.

Problems with the Study

The study's methodology was called into question. The difference in IQ levels was not statistically significant when the whole population was considered. This includes both boys and girls.

A small study cannot prove that maternal fluoride exposure in pregnancy directly affected the child's IQ. The results may be being influenced by many hereditary, lifestyle and environmental factors. There is no evidence that it affects the fetal brain development.

Ferne Kraglund, a public health dentist and assistant dean at Dalhousie University in Halifax stand by the guidelines.

"Pregnant mothers should not decrease their intake of fluoride. They need it to maintain their oral health, which is linked to the health of their newborn babies."