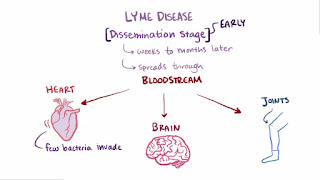 The view of the Lyme-Induced Autism Foundation (LIAF) is that it induces autism in children. They claimed that up to 90% of autistic children are infected with Borrelia. There is no peer viewed studies that support this claim.

According to the American Lyme Disease Foundation (ALDF), having an ELISA or Western Blot blood test is not proof of an active infection. It only indicates the presence of antibodies that can be the result of past infection with Borrelia burdoferi, which is the causative agent of Lyme Disease. These antibodies may be present at low levels for months or years after the active infection has been cured with antibiotics. In some people, the ELISA or Western Blot positive tests is due to a nonspecific cross-reaction.

According to the ALDF, there are serious issues with the laboratory tests LIAF performed to support their claim.


The prevalence of autism and Lyme disease are only in 9 states between 2004 and 2006.  They are AL, AR, CO, GA, MD, MO, NC, PA, SC, and WI. There is no evidence that autistic children are exposed to ticks at a greater rate than typical children.
Lyme Disease is a tickborne disease. When in the woods, it is very important to check hair and all over the body. They can be removed with tweezers or hemostats. Make sure you grab the mouth otherwise the head can get stuck.
Sources:
Ajamtan, M., Kosofsky, B.E., Wormser, G.P., Rajadhyalsha, A., and Alaedini, A.
JAMA 309: 1771-1772, 2013.
Burbelo, P.D., Swedo, S.E., Thurm, A., Bayal, A., Levin, A.E., Marques, A.,
and Iadorola, M.J.
Clinical Vaccine Immunology, May 2013, on-line ahead of print publication.