False “bleach cures” have been touted for autism, cancer — and now Covid-19.

The authors are mothers of autistic children who have been working to prevent medical misinformation. 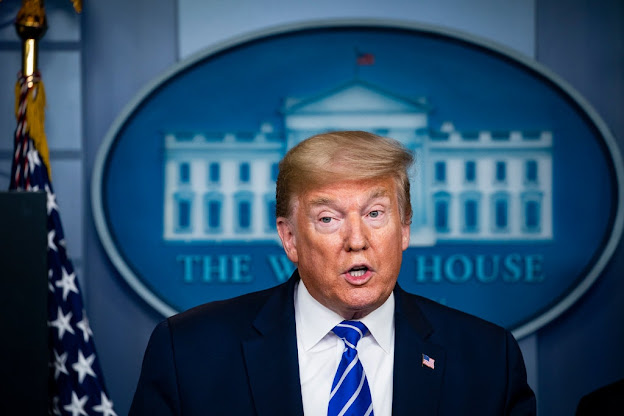 At a news conference on Thursday, President Trump surprised nearly everyone when he suggested using powerful cleaning agents, through an injection, as a possible Covid-19 cure.
As advocates against pseudoscience, we weren’t surprised at all. While Mr. Trump now claims his comment about injecting disinfectants was “very satirical,” there has been speculation that he was influenced by the leader of a group peddling such cures, even as the Food and Drug Administration moved to block the group from distributing its product.
In the social media groups we monitor, President Trump’s words were taken as a beacon of hope. As one promoter wrote: “Mr. President Donald Trump I totally agree with you. Chlorine Dioxide is a very noble product that has been used for many years throughout the world to cure people.”
For the past five years, as concerned parents of autistic kids, we’ve been documenting, following and reporting the “bleach cures” movement. The Genesis II Church and Kerri Rivera, among others, have been selling products like chlorine dioxide, marketed as “Miracle Mineral Solution,” or M.M.S., stating that the substances will cure autism, acne, cancer, diabetes, Covid-19 and so much more. This is a crucial red flag for pseudoscience: When a product claims it can cure anything, it’s a fake.
It has taken a pandemic to expose this movement and the ways that pseudoscience scammers use social media and fear to sell their products. It’s crucial, now more than ever, to look at the consequences of misinformation and why we need a more responsible approach to content management from big tech companies such as Facebook and our regulating authorities.
We have been infiltrating pseudoscience groups on social media in order to report these companies to regulators, with mixed results. We’ve gotten a close look at the psychology that draws people toward such products — and in our view, it is akin to the psychology that drives some of the Trumpist worldview. It is a siege mentality, rooted in the ideology of the anti-vaccine movement, based on anecdotes, conspiracy theories and a fear-mongering distrust of so-called Big Government.
From monitoring these groups, we’ve watched as the marketing of the “biomedical cure” industry has become increasingly linked with a distrust of social institutions in general. Much of it is based around the autism-vaccine myth, first made popular by Andrew Wakefield and later perpetuated by Jenny McCarthy, Robert Kennedy Jr. and others. President Trump himself has lent support to the autism-vaccine myth, tweeting in March 2014:

Healthy young child goes to doctor, gets pumped with massive shot of many vaccines, doesn't feel good and changes - AUTISM. Many such cases!

The belief that there is a link between vaccines and autism has been disproved by many studies, but some parents still decline to vaccinate their children. As a result of lower vaccination rates, communities around the world have experienced outbreaks of measles, mumps, rubella and other serious illnesses.
What do the “cures” being touted look like? Unfortunately, parents of autistic children have been advised by M.M.S. sellers to feed their children a protocol of 16 doses of bleach orally, in addition to a bleach enema to “cure” their condition. In the last five years, poison control centers have managed more than 16,000 chlorine dioxide cases, including a 6-year-old autistic girl hospitalized with liver failure.
Thousands of parents have been swayed into the dark world of autism “biomedicine” and their children have become 24-hour test subjects for dangerous protocols such as M.M.S., chelation and other products that have no evidence of benefit and clear evidence of harm. We think of the case of Abubakar Tariq Nadama, who died following a “chelation for autism” treatment.
One reason it is so difficult to combat M.M.S. is that it’s more than just a product: It’s a belief system. With Genesis II, for example, bleach products are made by an organization calling itself a “church” and touting its products as “sacraments.” We have seen the sellers create online “parent support communities” where the ideology around the product is continually reinforced. Group administrators, who work directly for the seller, cajole parents to “stay the course” and keep using the product.
Think about the message this sends to children with autism. To know your parents want to “cure” your neurological differences to the extent that they would feed you bleach multiple times a day is devastating.
The lack of regulatory protection is a big part of the problem. Pseudoscience thrives when there is cultural complacency. We reach out regularly to Facebook and other platforms asking for the M.M.S. “support group” pages to be shut down, but often Facebook’s response is that the groups do not “go against one of our specific Community Standards.” Kerri Rivera’s bleach-cure Facebook groups had thousands of followers before they were shut down — only after pressure from the media.
YouTube was also initially slow to respond in our view; however, it is responding now. To their credit, Amazon and eBay have removed M.M.S. products for sale.
While Health Canada has been cracking down on M.M.S., and one seller was convicted under Canada’s Food and Drug Act, the F.D.A. has been much slower to take action. Although we’ve contacted the F.D.A. for years, it wasn’t until this month that it issued temporary injunctions against the bleach-cure sellers based on the groups’ Covid-19 marketing. In our view, this should have happened long before the pandemic, to protect children with autism and others.
This week, scientists, doctors and public health authorities are themselves taking to social media in an attempt to reverse the harm of the bleach-cure myth. We hope this will bring more attention and action against all pseudoscience. For years, we have watched parents become so engulfed in misinformation that they have turned from hopeful parents to abusers, recruiting others into their deluded, fear-based ideology.
We have a message for America: When you see such fear-based ideology coming from our country’s leadership, don’t be surprised. Instead, take action. And please: Don’t take bleach.
Source:  https://www.nytimes.com/2020/04/26/opinion/coronavirus-bleach-trump-autism.html
Ann Borden King emma dalmayne In the media Melissa Eaton MMS