Can Dogs Be Autistic? 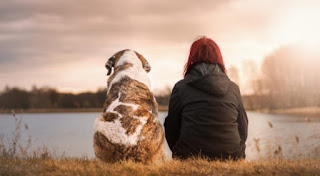 There has been the age old question going around the community:"Can dogs be autistic?"
The answer to this question is not as simple as it may seem. To answer this question, the psychology of dogs, structure of their brain and genetics need to be examined.  Psychology of humans and psychology of dogs are completely different.
Breaking Down Psychology of the Dog
Dogs have no internal dialogue. Dogs do not have language as humans know it. Dogs primarily communicate nonverbally. Communication is through eye contact and body language. This means dogs do not hold grudges. They do not think about what a human did to them a few weeks ago after they have been rescued.
Dogs do not learn the way humans learn. They learn by repetition. This is why when training dogs, repetition with pairing words to behaviors is important so the dogs learn what they need to learn. Dogs can learn about 150 words at most. Humans can speak many languages with thousands of words each language. Dogs have a mental age as an adult of a 3-5 year old human child.
An animal behaviorist gave the analogy of dogs being like a kindergarten box of crayons. Dogs still have emotions but they think simply. They have different brains than humans.
Dogs do not feel guilt. Some people believe that their dogs feel guilt because they know they did something wrong. Researchers have found this to be false. Dogs feel simple emotions but not complex emotions like guilt. However, there is some evidence that dogs do feel envy, but not to the same degree as humans.
Auditory Processing
One common trait in autistic people is how they process sound and auditory information. Dogs understand basic commands such as "sit," etc. This does not mean they understand words the way humans do. Humans use words as symbolic placeholders. Humans are very noun-centric. There are 10 times as many nouns as verbs because humans label everything.  Dogs are verb-centric. Dogs find actions more salient than names. In the dog's mind, the word "ball" is the act of retrieving the ball. Dogs can discriminate between words they have heard before and words they have not heard before. Reactions to novel words is different than from humans. Instead of immediately recognizing a word has no meaning, dogs pay close attention to novel words. This is because dogs are hyper social and they desire to please their humans.
Dog and Human Brain Compared

Dogs and humans do not have the same neural infrastructure. Larger animals have larger brains, in most cases. The same basic structure of a human brain are in a dog brain. Dogs have larger olfactory systems which is 2% of total brain weight. There are fewer folds in the dog brain than the human brain. This there is less surface area and less neurons. The frontal lobe in humans is 1/3 of the brain. In dogs, it is only 10% of their brain. Dogs have a amygdala because they get aroused, excited and scared. Dogs do have a hippocampus because they remember things such as commands and who their owners are.
Both humans and dogs have similar region activated when processing sounds or emotions.  This was shown via MRI. When the dog was exposed to different stimuli, more of the dog's area of the brain was active than the human brain when exposed to the same stimuli. One example of this is 48% of temporal lobe regions were active when processing sounds not voices. For humans only 3% of the temporal lobe was activated.The dog brain has a smaller frontal lobe than a human. The human brain and the dog brain are physiologically very different as show in the diagram above.
Genetics
Dogs and humans both have between 20,000 and 25,000 genes. Humans have 23 chromosomes. Dogs have 39 chromosomes. This is of course if there are no chromosomal abnormalities. Humans and dogs are only 25% genetically similar.
Can Dogs Be Autistic?
According to the CDC, autism is a developmental disability that can cause significant social, communication and behavioral challenges. Autism is a human neurological difference. It is based on human psychology, brain physiology and genetics. As proven above, dogs cannot be autistic. There are neurological difference in dogs but autism is not one of them. There is no diagnosis of autism in veterinary medicine. The answer is no, dogs cannot be autistic.
Sources:
https://www.cdc.gov/ncbddd/autism/facts.html
https://www.youtube.com/watch?v=a2N5yhXjPZY
https://www.researchgate.net/publication/234043741_A_Digital_Atlas_of_the_Dog_Brain#fullTextFileContent
https://www.sciencedaily.com/releases/2009/08/090810025241.htm
https://www.ncbi.nlm.nih.gov/pmc/articles/PMC7192336/
https://genetics.thetech.org/ask-a-geneticist/dog-vs-human-dna#:~:text=This%20would%20be%20like%20dividing,a%20different%20number%20of%20chromosomes.&text=Now%20the%20difference%20isn't,number%20spread%20across%2039%20chromosomes.
myths