Martyr Parents and Scouting Do Not Mix 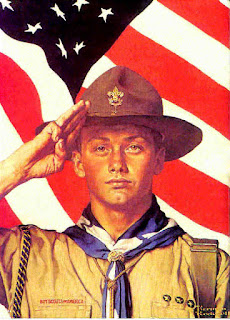 As many of you know, I am a Scoutmaster to a girls BSA troop, on the district committee and a Cub Scout Den leader. The girls troop I run is connected with an already established.

One boy and his mom I know since he was 8 and he is 12 now. My assistant scout master is a leader for the boy troop and my troop. He called me today. He knows that my whole cub scout den is autistic and my kids have different disabilities.


The situation is that the child in question was being asked about requirements for a BSA scout rank. One of the questions was "What is the cub scout motto?" It is Be Prepared but the child said "Be Liked." Of course the assistant scout master asked him if he thinks he is liked in the troop, wanting to see if that was a cry for help. He said he has a lot of friends in the troop, so that was no the issue. The ASM then said its "Be prepared." He can try it again at the next meeting. The scout was fine with that.

His mother would not have that. She wanted the scout master to approve that requirement. The scout master explained to her how it is not right but he can practice and work on it for the following week. The child said "mom its fine." She started to say how her son has ADHD and her life is so hard raising a disabled child. This is the same martyrdom we see with "autism moms."

Then she said she was going to contact the ADA (Americans with Disabilities Act) and council. The scout master told her to contact council and see what they say. I know the district executive and I know what the answer will be. He will tell the mom how to get accommodations and what forms need to be filled out by her. Each accommodation depends on his need. They like to see a 504 or an IEP to make that determination.


Our council is amazing at accommodating disabled scouts. All 6 of my children are scouts and are accommodated appropriately.  Three are autistic, three have ADHD and one of our autistic children is a diabetic. They are all accommodated. Some scouts are offered an extension to make Eagle Scout. It does need to be applied for.  For example A gets his own leader when on outings so his blood sugar can be monitored. Bug gets extra time to answer. Bug, N and A get breaks.

Problem with This Situation


The problem is that this mother was asking a scout master to lie about the requirements. The program is very inclusive and leaders are trusted to run the program appropriately. The scout cannot get out of the program what they need if they are micromanaged.

The troop level program is at the scouts's own pace and its not a race. The scout needs to earn each advancement themselves. The patches are only symbols of what the scout has accomplished.  There are plenty of adults there to help the scout should they need it.

When a requirement is skipped, the program does not work because each requirement has a purpose. A leader I know and have a lot of respect for calls it "fun with a purpose."

If a child does have a disability where they require accommodations, alternate requirements are available. They do need to try to complete the original requirements first. If they are unable, they talk to council and the district executive makes it happen.


To help this scout I gave her a copy of Roo's 504 with identifying information blocked out so she can ask for the right accommodations because they have very similar needs. I told her how my children get accommodations. My kids have more support needs than her son does so I thought I was a good person to give her this advice. She was really upset and then upset her son by embarrassing him. I felt bad for the scout. I really did.

What Could Have Been Done Instead

When the scout could not remember the motto and the scout master suggested working on it for next meeting, the mother could have said "You tried your best. Try it again next week." She can work with him so he remembers. This way,  he feels good about his accomplishment when its signed off during the next meeting.

This way the scout get the validation he needs and no one gets hurt or embarrassed. Supporting your child do the things they love makes it a much more positive experience. I can tell you from experience from my 6 scouts.
ADHD life scouting