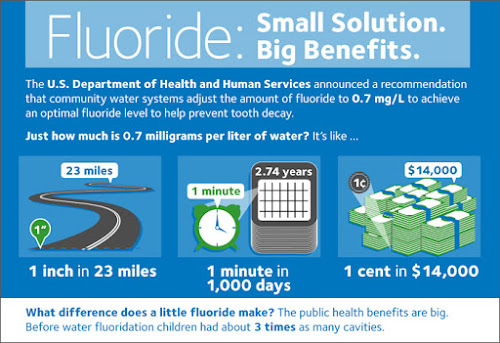 Fluoride is a natural occurring substance. It is found in soil, water and foods. It is also produced synthetically to add in drinking waters, toothpaste, mouthwashes and other products. Water departments add it to municipal water supply because studies have shown that adding it can reduce the occurrence of tooth decay in the local population.

There has been a controversy that has risen regarding fluorides' affect on health, including problems with bones, teeth and neurological problems. These health issues only happen when there is an excessive exposure to fluoride. These problems WILL NOT RESULT IN THE SMALL DOSE IN DRINKING WATER OR TOOTHPASTE. This will only happen in cases of accidental contamination of drinking water due to an industrial fire or explosion.

Dental fluorosis- exposure to high concentrations of fluoride during childhood, where teeth are developing, can result in mild dental fluorosis. There will be tiny white streaks or specs in the enamel of the tooth. This does not affect the health or the teeth but discoloration can be noticeable.  Do not use fluoride on children under 6 years of age. Children under 6 should use mouthwash, toothpaste free of fluoride.
Skeletal Fluorosis- Excessive exposure to fluoride can lead to a bone disease known as skeletal fluorisis. Over many years, this can result in pain and damage to the bones and joints. The bones my become hardened and less elastic, increasing the risk of fractures. If the bones thicken and bone tissue accumulates, this can contribute to impaired joint mobility.
Thyroid problems. Some cases, excessive fluoride can damage parathyroid gland. This can result and hyperparathyroidism, which affects hormones in the body. This can result in a depletion of calcium in the blood. Lower calcium concentrations in the bones make them more susceptible to fractures.
Neurological Problems. in 2017 there was a report published that flurodie before birth coul dlead to poorer cognitive outcomes in the future.
There was a study that assessed 500 mothers and their children from 6 cities in Canada. The researchers estimated that the mothers fluoride exposure when pregnant and then looked at whether it was linked with the child's IQ when they reached 3 to 4 years old.
The researchers found a 1mg increase in the mother's estimated daily intake of fluoride through drinking water. When the children were 3 or 4, the boys had lower IQ scores than the children of the mothers who had lower levels of fluroide. There was no statistical association with the girls based on the mothers' urine tests.
Problems with the Study The study's methodology was called into question. The difference in IQ levels was not statistically significant when the whole population was considered. This includes both boys and girls.
A small study cannot prove that maternal fluoride exposure in pregnancy directly affected the child's IQ. The results may be being influenced by many hereditary, lifestyle and environmental factors. There is no evidence that it affects the fetal brain development. Ferne Kraglund, a public health dentist and assistant dean at Dalhousie University in Halifax stand by the guidelines. "Pregnant mothers should not decrease their intake of fluoride. They need it to maintain their oral health, which is linked to the health of their newborn babies."
Tooth decay is one of the most common health problems effecting children. Many people cannot afford the cost of regular dental checks. Adding it to drinking water can offer benefits to those who need it.
According to the American Dental Association, it has benefits when added to drinking water because:

A Cochrane review published in 2015 found that when fluoride was added to the water:

It does this through protection against demineralization and remineralization.
Demineralization. When bacteria in the mouth combine with sugars, they produce acid. This acid can erode tooth enamel and damage the teeth. Fluoride can protect teeth from demineralization that is caused by acid.
Remineralization. If acid has already caused some damage to teeth, fluoride accumulates in the demineralized areas and begins strengthening the enamel.
Sources:
https://www.medicalnewstoday.com/articles/154164
https://www.ada.org/en/public-programs/advocating-for-the-public/fluoride-and-fluoridation
http://www.thefluoriderebellion.org/
https://www.todaysparent.com/pregnancy/pregnancy-health/fluoride-during-pregnancy/
fluoride quackery myths