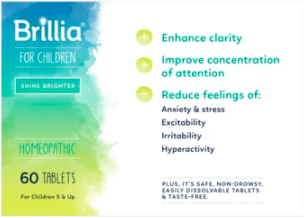 Brillia is a homeopathic remedy that is being marketed to autistic and ADHD children. They say its been available for almost 10 years with great success and history supporting its efficacy and safety. What they do not mention is that they have dangerous side effects proven in an independent study. Because it is considered a homeopathic remedy, it is not evaluated by the FDA for safety and efficacy. The FDA is not aware of ANY scientific evidence to support homeopathy as effective.

"Brillia is a unique combination of antibody science and homeopathic formulation. The active ingredient of Brillia is antibodies to the brain-specific S100 protein (S100B). This protein is an important regulator of many different intracellular and extracellular brain processes, e.g. various enzymes activities, calcium homeostasis, communication between neurons, etc. Since almost all mental and neurological diseases as well as temporal stress-induced conditions are accompanied by disturbance of the above-mentioned processes, especially communication between neurons, the normalization of these processes is considered to be a prospective way to treat people with such undesirable conditions. Brillia is an antibody conjugated to the S100B protein and does not alter the concentration of the S100B protein in the bloodstream. Brillia’s efficacy stems from its ability to regulate the activity of the S100B protein and does not alter its concentration. In order for a protein to have an effect in the body, it needs to bind to its target, such as an enzyme. Proteins have very specific conformations that ensure that only the correct protein binds to the correct target molecule. Once the protein correctly orients itself into the active site of the target molecule, this is when the protein causes an effect in the body. When Brillia binds to the S100B protein, the overall shape of the protein is altered, hindering its ability to bind to its target molecule and thereby controlling its activity in the body. In short, Brillia stops the S100B protein from acting in the body by changing its shape, consequently regulating levels of anxiety and hyperactivity."

It acts as a stimulator of cell proliferation (increase in numbers) and migration and an inhibitor of apoptosis (cell death) and differentiation. It has an important role in brain, cartilage and skeletal muscle development and regeneration and repair.

The active ingredient of Brillia is Lapine S-100 immune globulin. It is produced using antibodies to brain specific S-100 protein (S-100B). Antibodies fight pathogens. Pathogens do not cause autism or ADHD.
The company does warn the consumer to avoid if they are lactose intolerant in small print but the National Institute of Health gives that warning while the company is negligent.

They Cannot Argue with Real Science

There was a study conducted by Timothy Allen, Rashash Dhoaklokia, Sylvia Johnson-Park, Giridar MNV and Naveed Basha Court. They were trying to prove the effectiveness of Brillia for generalized anxiety disorders. This study included 198 subjects where 98 were administered Brillia. The other 100 were administered a placebo. This was a mutlicenter, double blind, placebo controlled randomized study during a course of 12 weeks.
After this study was conducted, it was found that the clinical changes and laboratory parameters were not significant. There was not a significant different in the findings between Brillia and the placebo.
Side Effects:
In another article by Laila Al-Ayadhi and Gehan Ahmed Mostafa in the Journal of Neuroinflammation, they studied the serum S100B protein and anti-ribosomal P antibodies in 64 autistic children compared to 46 neurotypical children. Autistic children have higher serum S100B protein levels than neurotypical children. These antibodies are not a contributing factor in the elevation of the S100B protein levels. This debunks what Brillia claims to do.
Sources:
https://dailymed.nlm.nih.gov/dailymed/drugInfo.cfm?setid=680778b9-52d7-562c-e053-2991aa0a72b6&fbclid=IwAR0GAocEiNhQ8mOP6oj6GCtqwvCmEqL-YWP-r130d95kczcqIkbUYRDZZr4
https://www.oatext.com/clinical-and-safety-evaluation-of-brillia-in-patients-with-anxiety-disorder.php#gsc.tab=0
https://www.medicinenet.com/script/main/art.asp?articlekey=6533
https://www.healthline.com/health/cold-flu/nasopharyngitis#:~:text=Nasopharyngitis%20is%20commonly%20known%20as,or%20bacteria%20can%20cause%20nasopharyngitis.
https://www.mayoclinic.org/diseases-conditions/nonallergic-rhinitis/symptoms-causes/syc-20351229
ADHD quackery