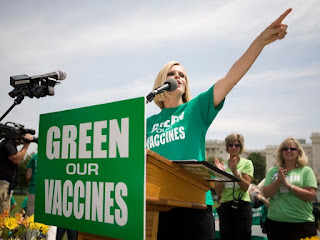 Jenny McCarthy is a prominent voice in the anti vaccine movement. She an actress and celebrity who started off as a playboy bunny. She was born on November 1, 1972 in Chicago, IL. She gained her fame on a 1990's MTV dating show called "Singled Out." She has since appeared on "Just Shoot Me!" and "Scary Movie 3." She has been very vocal about her anti vaccine beliefs. Since she started her activism, there has been more than 700 cases of measles reported across the United States. This is the greatest number reported since 1994. She got this idea from Andrew Wakefield and his falsified scientific study where he lost his license to practice medicine. She states that Wakefield was "being discredited to prevent a history study from being published . . . he is one of the world's most respectful and well published gastroenterologists."

"It's massive propaganda campaign. By some estimates there are almost 500 anti vaccine websites amplified on Facebook, they weaponize Amazon . . . we are seeing real public health damage being done," says Peter Hotez, the dean of the National Tropical School of Medicine at Baylor College and ally of autistic people.

Celebrities like McCarthy have been influential in spreading the misinformation that vaccines are dangerous.

McCarthy started her anti vaccine activism in 2007. She states that vaccines cause autism when scientific evidence says otherwise. She states that her son Evan was diagnosed as autistic after having the MMR vaccines. She had reportedly told CNN that her son "recovered" from autism through a treatment plan of diet changes, vitamins, supplements, hyperbaric oxygen therapy and detoxing the body from metal and candida.

"He does not eat any wheat, milk, sugar, soy, eggs, yeast and most fruits, and his diet is fully rotated."

According to Dr Lainie Friedman Ross, a pediatrician and associate director of the MacLean Center for Clinical Medical Ethics at the University of Chicago,"Restrictive diets, if they are very restrictive, can lead to nutritional deficiencies." There is absolutely no data that show restrictive diets cure autism.

Since then, McCarthy has published several books on Autism (Louder than words: A Mother's Journey in Healing Autism, Mother Warriors: A Nation of Parents Healing Autism Against All Odds.)

She was a founding board member of Generation Rescue. She founded Generation Rescue with her then boyfriend Jim Carrey and JB Handley. Generation Rescue is an Anti Vaccine group that linked autism to vaccines and promotes medical mistreatment of autistic people. When on the Oprah Show and promoting one of her books, she told Oprah that she learned about autism from "the University of Google." Generation Rescue has since shut down due to public pressure. 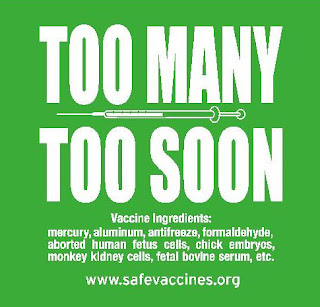 "We are not here to destroy the vaccine program. We're here to lend our voices for the millions of people calling for balance and moderation when it calls to substances that we give our children,"states Jim Carrey. "They are not bottomless pits that you endlessly pour substances into. You have to consider the cumulative effect. Not only that, the possible interaction. Every other drug has interaction with other drugs and yet they assume vaccines won't."  Both Carrey and McCarthy have no medical background, education or experience.

The timing for this rally was poorly timed due to it being right after Barack Obama won the democratic nomination. The media was more concerned with the first Black presidential nominee from a major party. Due to this, there are next to no news coverage. There was only a handful of TV appearances by one of its celebrity organizers.

"What I really am is "anti toxins" in the vaccines. I do believe that there is a correlation between vaccinations and autism. I don't think it's the sole cause, but I think they're triggering- its triggering- autism in these kids. A really great example is . . . is, sometimes obesity can trigger diabetes. I do believe that vaccines can trigger autism . . . It's so much more than just mercury. That is one ingredient in the recipe of autism . . . People don't realized that there is aluminum, ether, antifreeze, still mercury, in the shots."

That entire quote is medical misinformation.

"We firmly believe that the cause of the epidemic of autism is due to vaccine injury and/or other environmental exposure-pesticides also. The moment that I went online and researched about autism and saw and learned about a vaccine connection, I felt this kind of jolt, honestly, physically throughout my whole body, and said 'oh.' It was almost like I got on the right train right now for my life's purpose." Someone needs to tell McCarthy that you should not believe everything you read online.

In 2014, McCarthy had fought back against rumors that Evan was diagnosed with Landau-Kleffner Syndrome. This is a rare disorder in which children lose the ability to verbalize and comprehend language.

McCarthy is a self styled advocate for autistic children and she considers it her most important role in life.

Short Lived Career on The View

In 2013, an announcement by ABC that McCarthy was joining "The View" as a cohost sparked a firestorm of criticism from doctors, journalists and others who argued her elevated platform would enable her to better spread vaccination related misinformation, said the Columbia Journalism Review.
A letter was sent to ABC from Slate writer Phil Plait,"Ms. McCarthy is a vocal activist for highly dangerous health ideas, including the mistaken belief that vaccines cause autism. While the world suffers outbreaks of measles and pertussis, Ms. McCarthy continues to advocate against vaccines. Having her host a respected show like 'The View' would damage its reputation."
Michael Spector of the New Yorker shared the same opinion,"She will be the show's first co-host whose dangerous views on childhood vaccination may- if only indirectly- have contributed to the sickness and death of people throughout the western world."
Her time on the show was very short. This is because her views with no scientific basis created turbulence with the co host Barbara Walters.
"If you ask 99.9 percent of parents who have children with autism if we'd rather have the measles versus autism, we'd sign up for the measles." This why parents do say they would rather have a dead child than an autistic one. This is extremely harmful and is still being fought today.

In 2007, Jenny McCarthy was the keynote speaker for the AutismOne conference. She spoke about her propaganda against vaccines. AutismOne praises her for her fight against vaccines. "Poised and purposeful Jenny accomplishes what for decades no doctor or scientist has been able to do - Jenny, a mom, firmly placed autism and vaccines in the public debate."

Autism One calls the pro science activists "resistance by the establishment."

Because she was the keynote speaker at AutismOne in 2007, the antivax movement is what it is today. Thank you, Jenny, from the autistic community. Thank you for the hostility and fear to be ourselves that you instilled into our society. You used your platform to create a society of fear. Jenny is not the creator of the movement but she definitely gave it the momentum it needed to endanger a lot of lives.

On a personal note, when Bug was diagnosed, my mother told me I should listen to what McCarthy had to say. I was in shock. I did not know about my own neurology. I knew I have ADHD but thats about it. I was shocked. I told her,"I would rather trust people in a medical profession than an actress. What does an actress know about vaccines or medical care?" I am glad I trusted my gut. Bug is a very proud autistic and I would not change that for anything in the world.