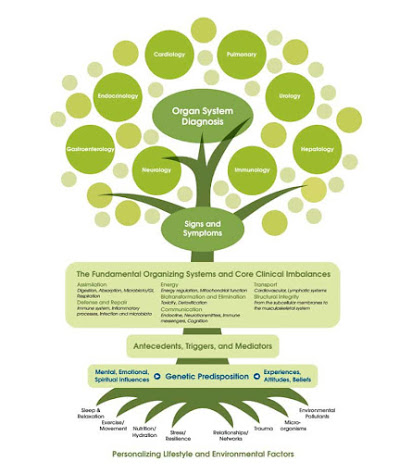 Functional medicine is a form of alternative medicine (sometimes called integrative medicine) that includes a large number of unproven and disproven methods and treatments of different diseases, illnesses and disabilities. They claim that they focus on the "root causes" of different conditions based on interactions between the environment and the gastrointestinal, endocrine, and immune systems to create "individual treatment plans." The treatments that functional medicine doctors recommend are normally not supported by medical evidence.  It is described as quackery, pseudoscience and alternative medicine.

Functional medicine was invented by a chemist named Jeffery Bland. He and his wife Susan founded the Institute for Functional Medicine in 1991 as a division for Healthcomm.
Also during that year, the US Federal Trade Commission said that Jeffery Bland's corporations HealthComm and NuDay enterprises had fraudulent claims that their products could alter metabolism and induce weight loss.
This program cost $30 per week. It included instructions and  a meal replacement formula (fiber capsule claiming to be a natural appetite suppressant). It was featured on a half hour TV show called "The Perfect Diet" that had convincing testimonials.
The FTC found that they violated a consent order in 1995 by making more fraudulent claims. The products were part of a weight loss program called UltraClear. They claimed that it provided relief from gastrointestinal problems, fatigue, food allergies, mercury exposure, kidney disorders and rheumatoid arthritis. The companies were fined $45,000.
Dr. David Gorski, an oncologist, has written about the vagueness as a diliberate tactic by the Blands through functional medicine.

How Functional Medicine Describes Itself.

In 2014, Cleveland Clinic was the first academic medical center in the United States to establish a functional medicine program. They partnered with Mark Hyman, the inventor of functional medicine and the board president of Clinical Affairs at the Institute of Functional Medicine (IFM) to start this department.

The Cleveland Clinic Functional Medicine describes the functional model of care as "patient centered approach to chronic disease management. It seeks answers to the question 'why are you ill?' so you can receive personalized, effective care for your needs."

"Functional medicine providers spend time listening to you and gathering your medical history. We use this information to identify the root causes of the illness, including triggers such as poor nutrition, stress, toxins, allergens, genetics and your microbiome."

The average person would not pick up on the red flags in that statement. Functional medicine claims that illness is triggered by microbiome (gut), toxins (vaccines), allergens, poor nutrition (nonrestricted eating), etc. They would recommend restrictive diets and being anti-vaccine. The quack community is obsessed over the gut for some reason.

They utilize unnecessary, expensive tests performed in the named of "holistic" healthcare. This is because they claim this is how they will find the underlying causes of what ails their victims.

By saying they are patient focused, they attract people who want to be taken seriously. This leads to a dangerous patient/provider relationship. The patient expects to be prescribed treatments that are proven but instead they get quackery.

None of these treatments are actual proven treatments and they have blood on their hands.

The autistic community now knows that the Cleveland Clinic practices quackery and that they should stay away.

What Functional Medicine Says About Autism