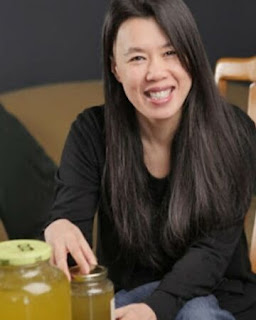 Jillian Mai Thi Epperly who is 44 years old and from Canton, Ohio is the creator of a substance called Jilly Juice. She was born in Vietnam. She moved to the United States in May, 1975. She was under two years old when she was adopted by her American parents.  She claims there is a substance called candida that causes disease in the body. Epperly states that drinking a gallon of this Jilly Juice every day can be used to treat any disability or disease. She has no medical training but has been preaching the benefits of her homebrew substance to a growing online following of 58.000 people in a private facebook group.

What is Jilly Juice

Jilly Juice is made by blending water, large amounts of Himalayan salts with kale or cabbage that is fermented at room temperature for three days. Epperly has published a book "Candida: Weaponized Fungus Mainstreaming Mutancy."detailing her beliefs. She claims that this "juice" can reverse the aging process, reverse homosexual behavior, reverse paralyis, chronic disease and cure autism.   She even claims it can regrow limbs! There is no scientific backing at all.
Epperly states the "power of Jilly Juice" can change the biochemistry of LGBTQ. She has argued in a Facebook post that gender identity is caused by a "mutation of the body."
"I'm proud of being a leader of a poop cult,"Epperly states.

There was a counter movement against Jilly Juice on facebook to take it all down. Facebook refused to take the group down because it "did't go against our community standards." This should not surprise anyone since FMT and other quackery groups still exist on facebook.
Epperly did archive her group but created a membership site.

On her website, Epperly charges $5 per month or $30 per year to access content on the website. This includes private forums. She also offers private phone consulations which cost $70 per hour.
She states on the website that "The protocol is not intended to diagnose, treat, cure or prevent any disease. Consult your physician before beginning any program." She states all the benefits of her substance but states her protocol on her website is not medical advice.

Side Effects of Jilly Juice

The side effects of this Jilly Juice:
Epperly states that these side effects are all signs that her juice is ridding the body of parasites. Sounds like MMS, doesn't it?

A Jilly Juice Related Death and the FTC

A follower by the name of Bruce Wilmont, who had stage 4 pancreatic cancer had died in July of 2018. Their family does partially blame the Jilly Juice for their loved one's death. Wilmont made a large batch of the drink as a last ditch effort and died within a month.  His Rabbi found him after he collapsed on the floor in his home. His daughter said he was emaciated.
"My dad was really desperate,"Taykor Wilmont said."He was really sad and did not want to die." She said that he followed the protocol to the letter and proudly showed his collection of jars on facebook and in messages to Taylor. 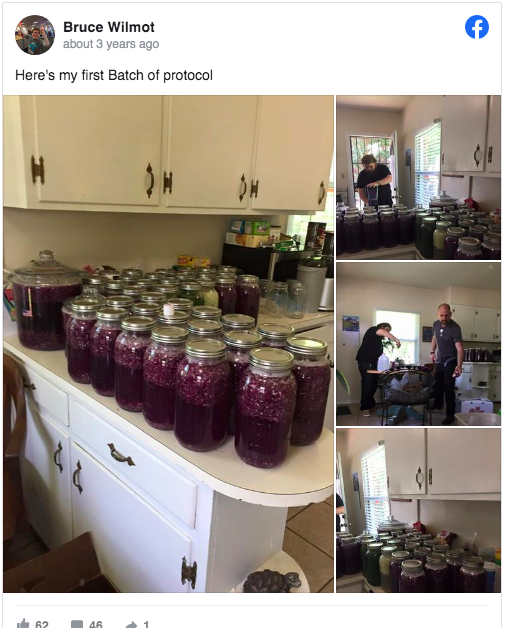 Epperly states that she cannot be held responsible for this death. he claimed to be a "good Samaritan" who reached out to him to try to help him. "Hey, I've got something that could possibly be good for you."
Since this incident, the Federal Trade Commission has been cracking down on her quackery with a formal letter demanding to present evidence for her outlandish claims. They are also threatening to force her to refund all her customers.

The Attorney General of Ohio's Interest

The Ohio Attorney General's office sent Epperly a letter requesting proof regarding her claims, including customer testimonials. The AG office cannot confirm or deny whether they had launched a formal investigation.
"There is no legitimate substantiation for the claims she is making, then that opens the door to a lawsuit against her." said Efthimois Parasidis, an associate professor of law and public health at Ohio State University.
"Ohio has a consumer protection law that is specially designed to protect consumers about deceptive sales practices."
Sources:
https://www.buzzfeednews.com/article/nidhisubbaraman/poop-cult-jillian-epperly-ohio-ag#.csWNEpD4b
https://www.newsweek.com/jillian-mai-thi-epperly-claims-cabbage-juice-cures-autism-homosexuality-and-909737
https://www.dailymail.co.uk/health/article-6244321/I-held-accountable-says-poop-cult-leader-claimed-cabbage-drink-cures-cancer.html
https://www.metro.us/jilly-juice-recipe-creator-claims-her-concoction-can-regrow-limbs-curehomosexuality/
candida jilly juice LGBTQ quackery