Autistics are Speaking Out against Tom Clements

I am sure most of you have read the article by the Guardian. Like most of us ,I was very angered by this article. We will dissect it paragraph by paragraph. Almost like a necropsy when I first started veterinary technologist school. The exact words from the article will be in italics so you can follow along.

"The word autism means a lot of different things to different people. To some, it conjures an image of the socially awkward eccentric who, besotted by a narrow set of interests, eschews small-talk and large gatherings in favour of solitude. To others, it’s a profoundly life-limiting disorder that consumes every waking hour of a family’s life, a medical disability that entails unpredictable bouts of aggression resulting in torn upholstery, cracked skulls and savage bites. Severely autistic people have a life expectancy of 36 in the United States and 39.5 in Europe, while their parents and care-givers often experience PTSD and stress similar to that of combat veterans. Mildly autistic people, on the other hand, though far more prone to depression and suicide, can go on to lead productive and fulfilling lives, often blending imperceptibly into the wider population despite their idiosyncracies and social difficulties."

What Mr. Clements is describing is a spectrum. He is describing it in such a way where it mongers fear. The definition of a spectrum is a broad range of varied but related ideas or objects, the individual features of which tend to overlap so as to form a continuous series or sequence. Nowhere in the definition does it say it is linear. There is no autistic person who is just like another autistic person. There are many different autistic traits. He is focusing on the parents instead of the autistics themselves. This type of talking leads to the tragedy narrative and MMS abuse.

He uses functioning labels as well. They are very harmful. How are they harmful? If you classify someone as high functioning, people will see them as people who do not need services. If you classify someone as low functioning, people will have low expectations of that person. You should always assume competence. Imagine being called low functioning. Imagine how that would feel. Just because someone is non verbal, for example, does not mean they can't become successful. I have a good friend who is and she went on to be a pharmacologist.

"Yet a report this week claimed that the difference between people diagnosed with autism and the rest of the population is shrinking. The autism spectrum is so all-encompassing that experts are now finally starting to question the validity of the term itself. After studying the meta-analyses of autism data, Dr Laurent Mottron, a professor at Université de Montréal, concluded that: “The objective difference between people with autism and the general population will disappear in less than 10 years. The definition of autism may get too vague to be meaningful."

"It is hardly unreasonable to think that a spectrum that encompasses an erudite professor such as Dr Temple Grandin – who has authored several books and can speak in entrancing detail about her condition to packed lecture auditoriums – and severely autistic adults in institutions who have to wear nappies due to incontinence and helmets to protect themselves from involuntary self-injury, is so broad so as to be medically meaningless."

Yes. Dr Grandin did write several books and did speak in detail about her condition. She has spoken about it. I in no way endorse her. My thoughts on her are here. Autism is only a medical condition because the "experts" say it is. What the author calls "high functioning" are also self injurious.During a meltdown, we are not in control. We do hurt ourselves and others while it happens. The median age of an autistic in today's society is 35. Why is that? Suicide. There is so much "awareness" in this world. It leads to bullying where the victim just wants the pain to be over. Let me make myself clear. It is not the notion of being autistic, it is the treatment we receive from other people.

“Aside from changing diagnostic practices, the general shift in advocacy in the direction of the increasingly fashionable neurodiversity paradigm has led to what I and many others see as the trivialisation of autism. Neurodiversity posits that conditions such as autism, ADHD, dyslexia and dyspraxia are not so much conditions to be treated but differences to be embraced and even celebrated. Despite the noble intentions of many of its proponents, there are those who feel that neurodiversity excludes those for whom autism confers few if any real cognitive advantages. Despite its claim to be inclusive of all “neurotypes”, its ethos inevitably means that less verbally able autistic people are marginalised from the discussion. Rarely at a neurodiversity event, particularly one that aims to present autism as a competitive advantage in the marketplace, will you find an autistic person with an IQ of lower than 30 who is prone to lashing out and soiling themselves.”

They are wrong about neurodiversity. Disability is not a dirty word. Autism is a condition along with ADHD, dyslexia and other neurotypes. We know its not all puppies and kittens (sorry I am a veterinary technologist, I had to) and we have our struggles. Neurodiverstiy also allows us to have strengths. Advocating for ourselves is what they are afraid of. Why shouldn't we be celebrated? Neurodiversity is for EVERYONE. We want everyone to have the services they need. Not just for the select few. Everyone needs the appropriate support.

Now for everyone in the back NEURODIVERSITY is FOR EVERYONE!


"The increasing emphasis on autism as neurodiversity has also created a huge rift in the community, particularly between autistic self-advocates and parents. Self-advocates, many of whom possess an above-average intellectual ability as well as great insight into their own condition, celebrate their autism as a core feature of their identity and often promote their neurological difference as a strength. Many who self-identify on social media using the #ActuallyAutistic hashtag insist that autistic people must be at the forefront of all autism discourse and that only autistic people themselves can be considered to be true experts in the condition."


The emphasis on autism as neurodiversity has brought different autistics together through the Autistic Cooperative. Parents and experts have been deciding about us for far too long. When we finally have a voice through technology, there is a rift. There are more parents than ever listening to autistics about their autistic children. He makes an assumption about our intellectual ability. He has never met us. He does not know how many advocate with help. We do have a neurological difference and disability. Disability is not a dirty word. We are experts on our condition because we live it.

Tom Clemments coined the term "autistic dark web." The autistic dark web is essentially the anti neurodiversity movement. This article was not written in an objective point of view. He is biased. He even stated that the Guardian should not be trusted. 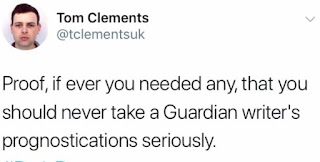 He is also working with William Shatner who has a history of bullying autistic advocates and activists. Shatner files can be found here. 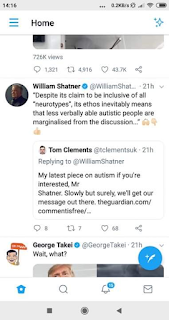 So can we really trust him? Nothing about us without us!

Posted by Amanda Seigler at 4:57 PM